Staffordshire Masonry – What’s in a Name?

Whats in a Name……

What’s in a name?

We, would not suggest any direct connection with the ‘Church on the Hill’ at Walsall from which we take our name, certainly not this present day – it is not unusual, a fair number of our Masonic Lodges are so named.

It is without doubt however that the lodges inception and existence is mainly due to its original founders and early members who were predominately stalwarts of that noble institution.  We are justly proud of this association.

Within the church you will see a number of reminders of this. – In the Children’s Chapel there is a magnificent marble tablet ‘To the memory of William Purvis’, erected by the people of Walsall (pic one).  It records all his battle honours during his twenty four years as a Sergeant in the Lancers, and that he was severely wounded  in the ‘Charge of the Light Brigade’, at the Battle of Balaclava’ in 1854, one of the few survivors of the gallant 600 – he was Tyler of our Lodge, Initiated as a serving Brother in 1875. 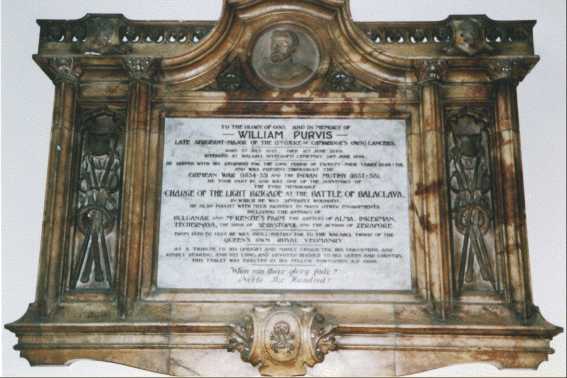 Close by in that same Chapel you will see a tablet to the memory of James Ramsey Newsam our Worshipful Master in 1853 – ‘Erected by a number of his private friends in Ireland and England’. He joined us from Lodges No’s 40 and 253 (Irish Constitution) at Belfast.  The Most recent example is the presentation marble on behalf of the Walsall Freemasons by Leslie Harper our Worshipful Master in 1961 and a Churchwarden. He organised the beautiful Stained Glass Window depicting in the centre light the striking figure of Hiram of Tyre, the builder of King Solomon’s Temple, holding in his left hand a model of the temple itself.  The central figure is ringed with symbols of the Craft, and other orders – Royal Arch Chapter, Mark Master Masons, Royal Arch Masons, Knights Templar and Rose Croix, all of whom contributed to the funding.  It was dedicated by the Bishop of Shrewsbury in 1962.

The origin of the Church, going back to some 700 years makes it the oldest in the Walsall district and the analogy here is that the Lodge of St. Matthew is also the oldest Masonic Lodge in the Walsall district being 165 years old, consecrated 16 April 1847 at the George Hotel by Colonel George Augustus Vernon supported by many distinguished brethren and personage from Staffordshire and other provinces.

With the development of Walsall High Street and probably a compulsory purchase of our High Street Rooms, a sale was negotiated and we came to a happy agreement with Hatherton Lodge for the use of their Masonic Hall from February 1966.  By 1972 Hatherton suffered the same fate which eventually resulted in the pooling of the proceeds of the sale of both lodge premises to purchase the present site and supplemented by contributions from other Walsall Lodges and Orders, and the Aldridge Lodge, building the excellent premises we enjoy today.

But where did it all begin…..

This entry was posted in History. Bookmark the permalink.